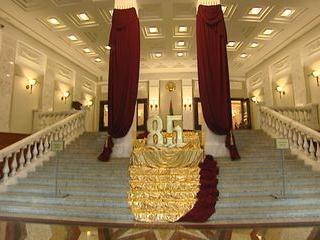 The main academic stage of the country – the Bolshoi Theater of Belarus – marks the 85th anniversary today. Over these years, 372 premieres were held. Several performances got state awards. Tours of the Belarusian ballet troupe and opera soloists were successfully held in more than 30 countries. Today the theater hosts a Doors Open Day with excursions to the backstage, and meetings with the creators of the performances.