Top 10 scientific discoveries of Belarus for 2016 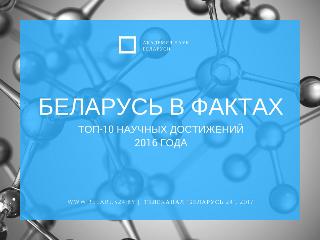 Fundamental research from Belarusian scientists for 2016 according to the Academy of Sciences of Belarus.

The top ten includes research on history, microbiology and optics.

1. Localization of states of light

A new method of localization of quantum states of light on the basis of a limited number of so-called reconstruction measurements. The method allows for efficient quantum tomography of light.

The result has been published in one of the most prestigious world scientific journal Nature.

2. A new type of light fields

Prediction and implementation of a new type of light fields –tunable laser beams Airy which possess self-construction ability in scattering and inhomogeneous media. Such beams are necessary for delivery of light energy over long distances in comparison with ordinary (Gaussian) beams.

A new method of complex large image analysis is based on in-depth information technology. The academician Sergei Kilin, Deputy Chairman of the Presidium of the National Academy of Sciences of Belarus, explained that the method resulted in the development of a highly effective method of automatic analysis of histological images which can detect breast cancer at the earliest stage.

In 2016 International Competitions (Tupac16 and CAMELYON16) were devoted to the issue of automatized breast cancer diagnosis. Among the participants were more than 100 professional teams from around the globe. The NASB team was among the top four in the nomination "Prediction of the Proliferation Index Based on Mitotic Counts," and was ahead of the teams from the USA, Germany, Great Britain, etc.

Mass transfer mechanisms in the processes of sintering of silicon and carbon with nano-additives, which make it possible to form lightweight structure elements of a composite from silicon-carbide ceramic with unique mechanical and thermophysical properties (layered identity of coefficients of thermal linear expansion and thermal deformation) were established. The main aim is to make large astronomical mirrors and use them in outer space.

Stimulated and laser radiation in multicomponent direct-gap semiconductors was discovered; the mechanism of radiative recombination, leading to their appearance in film structures, designed to create new-generation solar cells, was established.

A team of scientists synthesized deuterium modified amino-, nucleic and polyunsaturated fatty acids. Such acids have the effect of significant slowing biochemical reactions that cause various pathologies. The effect is realized when hydrogen atoms are replaced by deuterium in certain places of biomolecules that exhibit instability to oxidation. The compounds produced are promising for a new generation of medicines.

7. A step towards nerve cell renewal

A team of scientists obtained fundamentally important results for the prevention and treatment of metabolic disturbances and neurodestructive pathologies, including genetic modification with the help of dendrimers of cells of the nerve tissue with the aim of hyperexpression of a neurotrophic factor stimulating the recovery of the peripheral nerve and of using recombinant human lactoferrin. The result shows the ways of solving the most complicated issue of nerve cell regeneration.

For the first time, chemical compounds - modulators (isopropanol, ethanol, choline chloride), significantly accelerating the production of glucose oxidase enzyme by microorganisms, which is the basis for creating an effective thermally-stable preparation with increased catalytic activity used in bioelectronic devices.

9. A unique monument of the Viking Age

An archaeological complex was discovered and studied: Cordon in the Vitebsk Dvina area is a monument of the Viking Age (VIII-X centuries) unique to Eastern Europe . The materials of the complex prove the participation of the Varangians in the development of trade and economic potential of the region, reveal its extensive international ties and the leading role in the formation of the Dnipro-Lovatian route section "from the Varangians to the Greeks" at an early stage (IX- mid-X centuries) of formation of government agencies by East Slavs.

10. Reproduction of rye "in vitro"

A unique technology for producing regenerants in vitro ("in a test tube") from rye anthers, agricultural crops that are difficult to regenerate on an artificial nutritive medium, has been developed and tested. The creation of doubled haploids (DH-lines) makes it possible to shorten the time for obtaining homozygous forms of rye as parent components and to speed up the selection.